A post on the issues science (and humanity) is running into (particularly with scientific papers) and a possible solution.

The problem with scientific papers

If the fundamental pillar of science is the scientific method, then the scientific paper is the foundation on which it stands. Papers are an excellent tool for disseminating knowledge, but they have a critical weakness: their terseness.

Why, for example, aren’t we all on the same page about COVID-19, even when we know who the reputable sources of information are? (Or do we?)

The answer is accessibility. I’m not talking about papers being hidden behind paywalls (which is also an issue). I’m talking about how, when the average person reads a scientific paper, they get nothing out of it.

Scientists themselves aren’t immune to this problem. This is a condensed paper citation graph by field tweeted by David Perell: 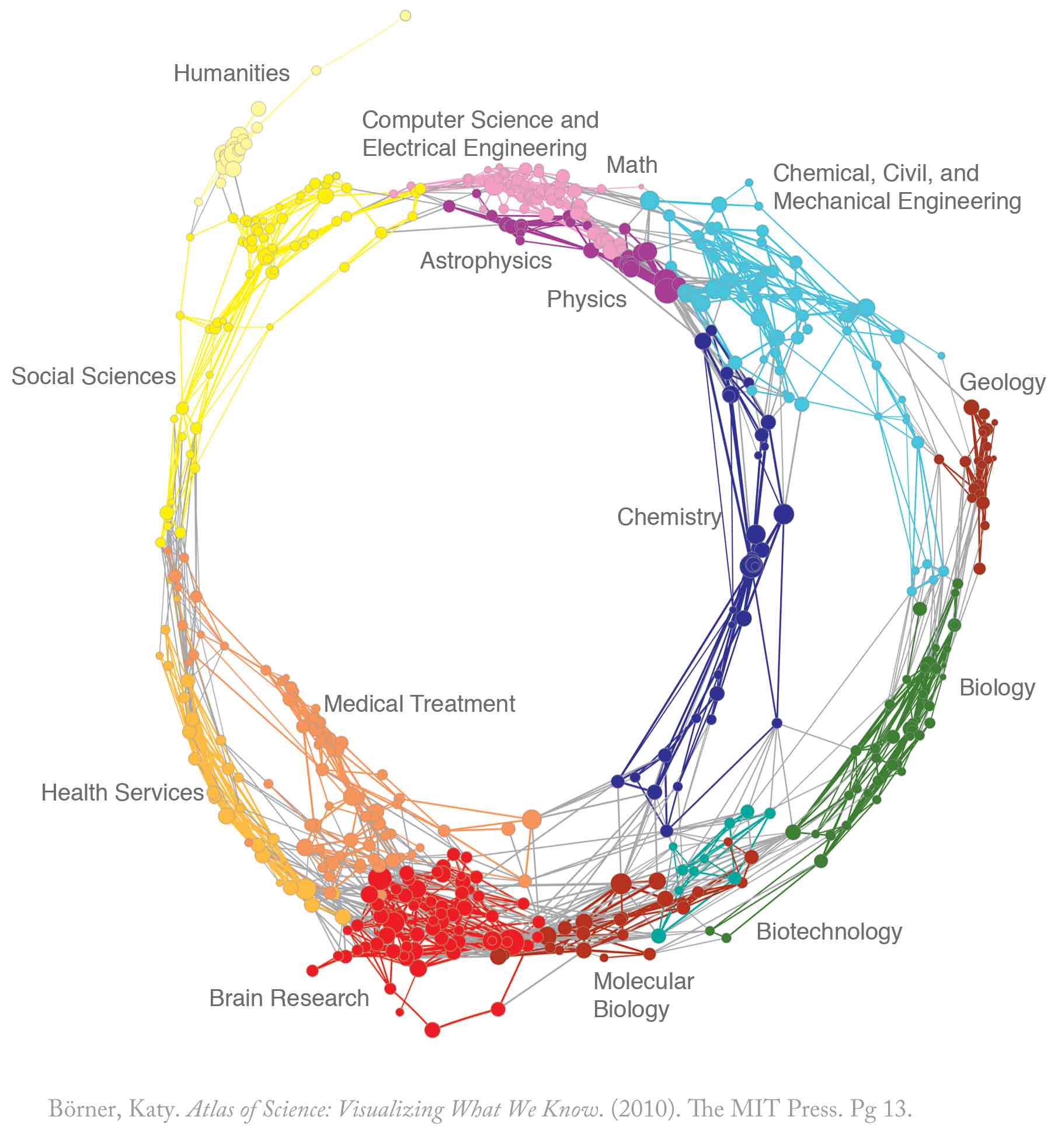 Our fields are siloed. It’s a lot easier to read a paper in your field than it is in someone else’s field.

This will only get worse as new fields branch out from others, and existing fields become more complicated.

So how can we fix this (or, at least improve it)?

Answer: The fact that it’s all gibberish. Words and symbols that (almost) nobody understands.

You might say, well, it’s obvious! The solution is Google!

Well if you’re like me, you’ve read a few papers and googled a few words. What happens? You have to google more stuff!

But wait, how does that first thing relate to this new thing?

So maybe you search for a blog post explaining these two things in context. There isn’t a good one. Crap. You’re stuck.

Or maybe you got lucky and had some knowledge of the first few terms. And then you got stuck.

Unfortunately, for the average paper, this is likely to happen a lot. And this assumes that the paper was written well! And that you have some prior knowledge!

If only there were something that would answer those questions, too! Maybe a kind of knowledge graph that had the concepts for a given field and the relationship between them.

That’s what the Evergreen Note System is.

But isn’t that how scientific papers already work? (i.e. citations)

I would argue that the scientific paper citation system is a v0.1 version of the Evergreen Note System. It has the same structure (i.e. a network) and similar functionality (showing you how ideas are related).

The main problem: The floor is unnecessarily high.

If you were to imagine an entire scientific field as a knowledge graph (i.e. concepts with connections between them describing their relationship), the list of things you need to understand to read a scientific paper would be a tree in that graph (think: flowchart).

To elaborate on the metaphor: the scientific paper is the bachelor’s degree. To complete the bachelor’s degree (understand the paper), you need to complete the required classes (understand the fundamental concepts of the field and look at the cited papers), which will have prerequisites (papers cited by the originally cited papers and prerequisite concepts to the fundamental concepts), which will…

We show that the class MIP∗ of languages that can be decided by a classical verifier interacting with multiple all-powerful quantum provers sharing entanglement is equal to the class RE of recursively enumerable languages.

To understand this paper, we probably need to know what an all-powerful quantum prover is.

Long story short: the “floor” of understanding you have to get to in order to understand a scientific paper is high. If you’re starting from scratch, you either have to spend years getting a degree or spend days, weeks, or possibly months googling and hitting your head against the wall.

Can we do better?

But wait! Months googling is still a lot less time than years getting a degree. Can we do even better? Most people don’t have months to go on a wild goose chase. What if we eliminated the head-wall factor entirely?

Now, imagine if you had the author right there in front of you. You can ask whatever you want - basic or advanced. He or she won’t be like those professors that yell at you for asking questions about, “things you should already know” - they’ll answer politely, succinctly, and informatively. Be like a 5 year old that won’t stop asking why.

It’s like doing the Feynman technique, except when you notice gaps in your knowledge, further explanation is right in front of you.

What’s your estimation for how long it might take to understand the paper with your author friend?

Obviously it depends on the paper, but maybe.. a few hours? A few weeks if it’s a doozy of a paper (or you have zero background - don’t worry, the next paper would be a lot easier! Probably hours or days).

The point is that college degrees are too broad (you spend too much time covering unnecessary information), and Google searches are too fragmented (you might find what you’re looking for, but you also need to track down or conjure any/all context).

With a tool like this, we could lower the barrier of entry significantly. And that’s just for one field.

Each field having its own knowledge graph would be extremely helpful, but because it’s a network, its value scales quadratically with its size (“network effects”). This means that if we assimilated all fields into one big knowledge graph, we could unsilo everyone and make all sorts of new connections.

What happens when you mix Biotech and manufacturing engineering? Robotics and Medicine? How about political science, HCI, and machine learning? I’d love to see some of the outcomes of those idea clashes. :)

A solution for research debt

I think it might be solution for research debt as well.

From the article, research debt has 4 forms:

If I had to summarize research debt, it’s essentially:

“I can’t find what I’m looking for, and when I do, I have trouble understanding it.”

Finding what you’re looking for

Ever hear of the Six Degrees of Separation?

It’s the idea that all people are six, or fewer, social connections away from each other.

I’m not sure what the degrees of separation would be for a robust knowledge graph, but I’m betting it’s in the same ball-park.

In other words, if you’re looking for a certain idea or concept, it’s likely that starting with what you know can get you there in just a few clicks. :)

When you find what you’re looking for, it’ll be succinct, but still comprehensive. If you’re wondering, “Oh, so it’s like X?” or, “So it’s basically Y + Z?” - that relationship is there, and you can read about it to further your understanding!

Don’t get me wrong, I’m really excited about this idea, and I think it could significantly move the needle on humanity’s progress.

That being said, there will be new issues (and probably old ones). This is just a concept sketch. Here are just some of the areas I think we will run into problems:

Still, I love the idea that I could pick up any scientific paper, know the tree of dependencies for understanding it, and have all the relationships between each concept available to me on demand.

I think that’s doable in this paradigm, and I think it could possibly result in e.g. cancer being cured n - 15 years from now, instead of n years from now.

You May Also Enjoy

A post on how I use Roam Research for project management that doesn’t seem tedious.

A post describing the “Evergreen” note taking system, how it excels over traditional note taking, and how to use it on Roam.

If you’re giving a gift to someone who expects it, that’s not a gift. That’s a transaction.

The Future of EdTech: My Vision

It blows my mind that EdTech isn’t the NUMBER ONE place people who want to make a difference in the world start jumping on.